The history of Pietra Porzia wine Estate has been closely linked to that of the Roman Castles
(Castelli Romani) since ancient Rome; with this article we try to tell you about it.

The origin of the name Roman Castles:

The name Roman Castles (Castelli Romani) comes
from the castles built throughout the area after the fall of the Roman Empire as centre of the
various fiefdoms in which the Roman aristocracy had divided the entire area. The only exception
was, from the Middle Ages to the 1500s, 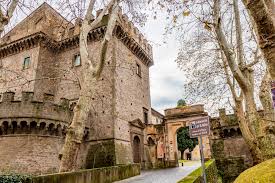 the city of Velletri which, in this long period, was a free
Municipality. Almost nothing remains of the ancient fortifications except for the walls of the abbey
of San Nilo at Grottaferrata built in 1500.

Prehistory and the History of Ancient Rome.

In prehistoric times the entire area of ​​the
Roman Castles was occupied by a Vulcan collapsed in ancient times, giving rise to a very fertile
volcanic soil and various small lakes no longer existing with the exception of Lake Nemi. 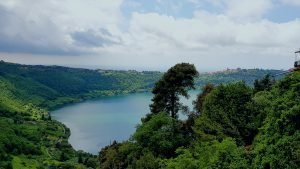 In the period from the Republic to the Roman Empire the area of Roman castles was famous for the
soil fertility and climate goodness so that the Roman senators had built many villas among
which, famous, were that of Cicero and that of Marco Porzio Catone, not to mention that of the
emperor Domitian included today in the papal park of Castelgandolfo .

Pietra Porzia and the Roman Empire

According to the latest researches, the valley in which
Pietra Porzia is now located was occupied in 496 BC by Lake Regillo, theatre place of a famous
battle in which the Roman cavalry led by the sons of Jupiter, the twins Castor and Pollux , had
succeeded in winning the Latino army led by Tarquinio the Superb, the last king of Rome. After
the battle, according a legend, the Twins had gone to water their white horses in the center of Rome.
Next to the Regillo lake stood the archaic temple of Giunone Regina, whose remains, 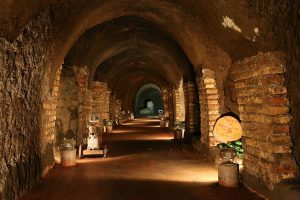 colum drums, square stones, which emerged by chance many decades ago during the excavation of a
vineyard, are now exhibited in the basement of the estate&#39;s cellar. The name Pietra Porzia perhaps
comes from Marco Porzio Catone who certainly had his villa in the area. The remains of a Roman
villa can still be seen under the modern villa transformed into a farmhouse. The ancient cellar
dug out of the tuff could be the terminal of emperor Claudio aqueduct.

The Roman Castles in the Middle Ages and Renaissance

Until the second half of the 1500s
the Roman Castles were at the centre of the struggles between the great families of the
aristocracy, especially Savelli and Colonna, in the following period, thanks to a long period of
peace the medieval castles have been transformed into sumptuous residences and new splendid
villas have been built by the most important families of Rome as Aldobrandini, Borghese,
Torlonia.
The fiefdom of Frascati belonged to the Prince Colonna until it was sold to the Apostolic Chamber
in 1522 under the pope Paul III Farnese. The construction of so many villas is due by the windy
climate of the Roman Castles that allowed to escape, during the summer, from the malaria that
raged in the city of Rome.

Pietra Porzia in the Middle Ages and the Renaissance:

In this period there are many news of
properties belonging to the Colonna family in which the name Petra or Pietra Portia, Pietra
Porcia, Petre Portii appear, there is also memory of a castle already crag in the fifteenth century,
the Castrum seu villa Pretaporci. 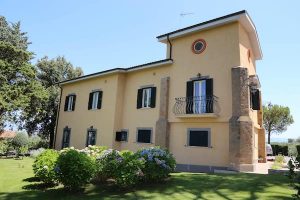 A tower next to the villa with its buttresses and almost one meter
thick stone walls (photo), now used as farmhouse, is certainly a witness of an ancient past that
could date back to the Middle Age.
H2 The Roman castles in the modern age: from 1700 many fiefdoms belonging to Savelli and
Colonna were bought by the Apostolic Chamber while the hills were filled with villas and Frascati
was connected to Rome by one of the first railway made by pope Pius IX.

Today the Roman Castles(Castelli Romani) area is one of the main tourist destinations around
Rome both for weekends and long stays due to his particularly pleasant climate.

Pietra Porzia from 1700 to nowadays

The first news of Pietra Porzia dates back to the 1714 land register of Pope Clement XI
Albani, in the land registry there is memory of worked lands, meadow and vineyard belonging to
the Popes located in a Frascati area called Quarto di Pietra Porci. In the following Gregorian land
register of 1818 commissioned by Gregorio XVI appears the name Quarto di Pietra Porzia
with a map of the current estate including the part at the top of the hill formerly part of the Tenuta
di Pantano belonging to Borghese princes.
In 1856/90 the Gregorian Land Register was updated and the name Quarto di Pietra and Lago
Regina appear in memory of the ancient Lago Regillo and the Temple of Giunone Regina, place
names that are again listed on the current land register of 1990.
The date 1892 appears engraved on the bricks at the entrance to the cellar and the water basin at
the entrance of the property.
At the beginning of the 20th century, the estate, as it is now, was bought by Vittorio Giannotti,
grandfather of the current owners Vittorio and Fernanda Giulini. 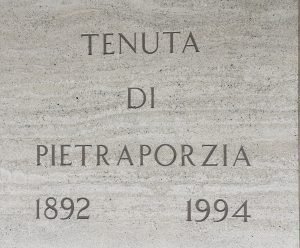 In 1994 the wine cellar was completely renovated, in 2006 began the farmhouse activity in the
villa designed by the architect Luccichenti, one of the most important architects of the fascist era,
transforming the country villa built by Vittorio Giannotti in 1940. 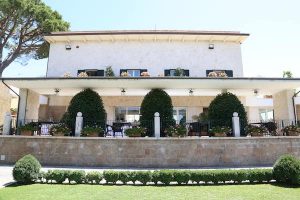 As you have noticed the history of the Tenuta di Pietra Porzia is closely linked to the history of
Frascati and Castelli Romani without forgetting of course the wine that, over the centuries,

has always been the first element of the pleasure of life as you can discover yourself by coming to visit
us after completing the form below.